Stay tuned for upcoming tour dates
​To book your own private tour please call us at (845) 647-3000
Travel with a chef to Mt Etna Volcano, Historic Ruins & Mountain Vineyards
Sicily, the largest Mediterranean island, is just off the "toe" of Italy's "boot."  There is never a bad time to visit Sicily.  Travel from the West Coast to the Eastern Mt Etna and ferry to a vineyard island.  Every inch of Sicily is breath-taking.  ​ 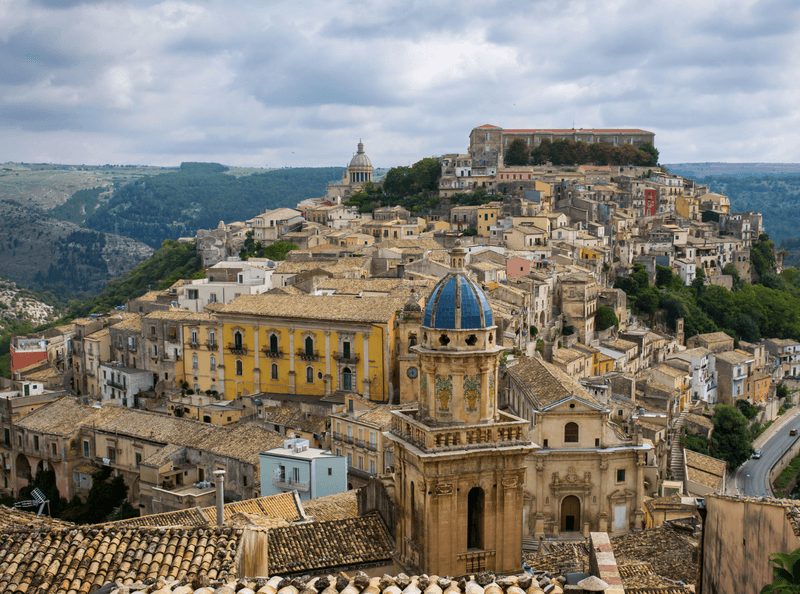 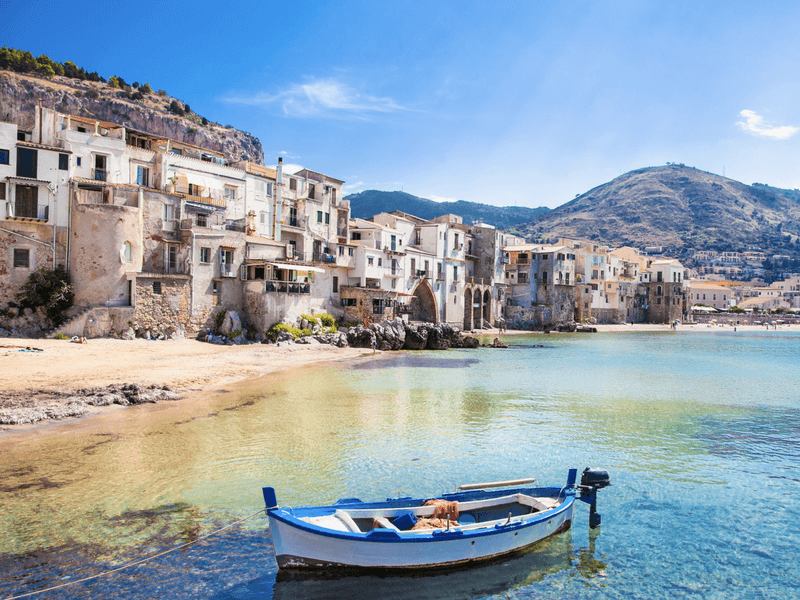 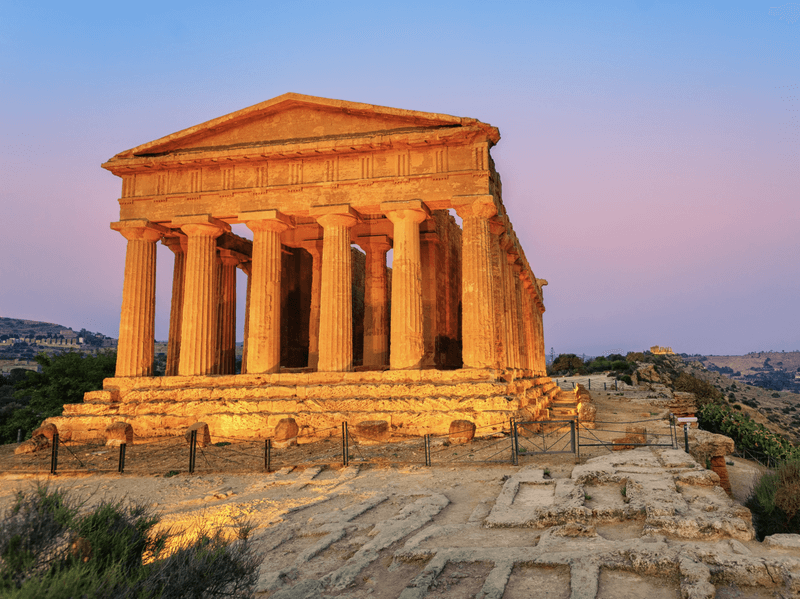 Details of this trip are being planned at the moment.
​Updates will happen quickly, stay tuned

Sicily is a huge island where every little city seems to have its own culture.

The ancient seventeenth-century structure of Baglio Sorìa is one with the agricultural estate.
Located on a hill, overlooking the enchanting natural scenery of the Trapani countryside, Baglio Sorìa is a perfect example of a typical Sicilian architecture, extremely widespread in western Sicily.
The Baglio was the hub of the working activities and life of the rural community. It was the reference point for men and women who, from generation to generation, have shared it and handed it down to the present day, preserving the authenticity of Sicily and the proud spirit of its inhabitants. The original building consisted of the main house, the warehouses, the workshops for craftsmanship and some peasant houses. 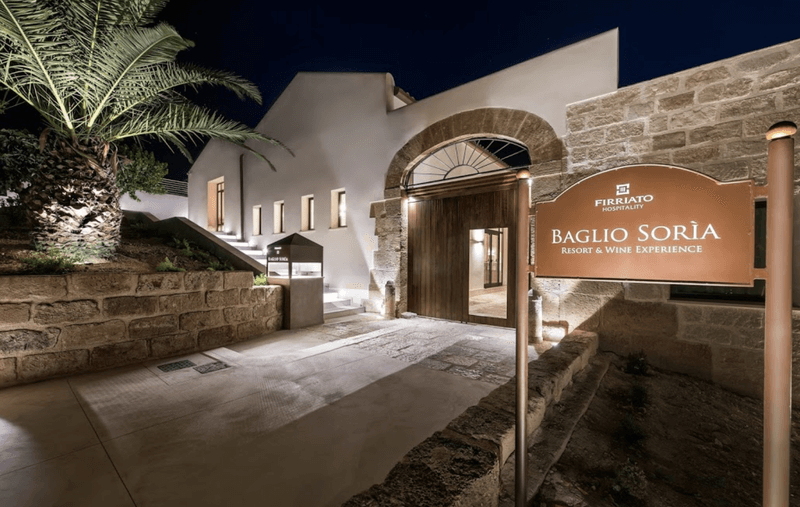 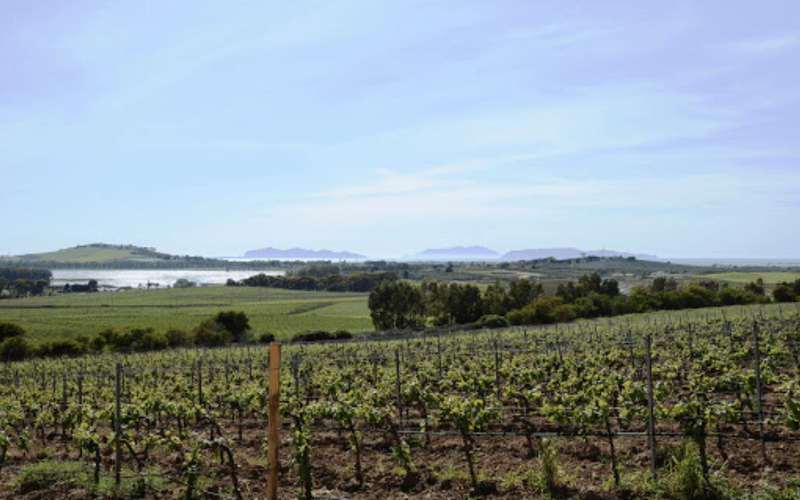 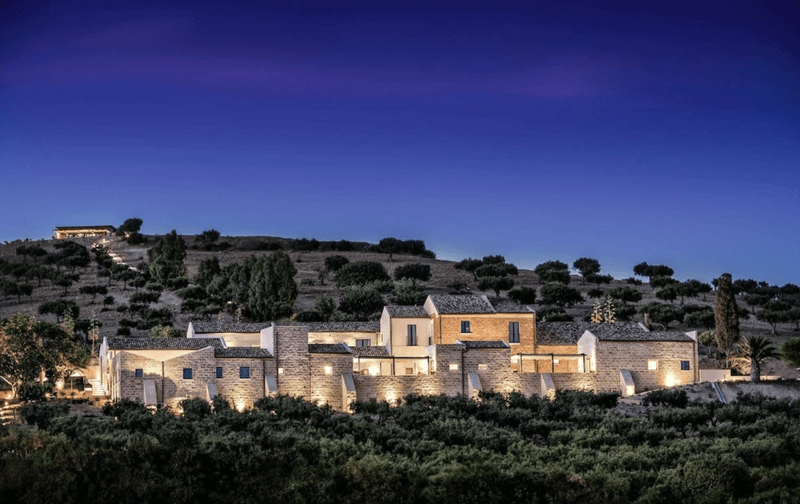 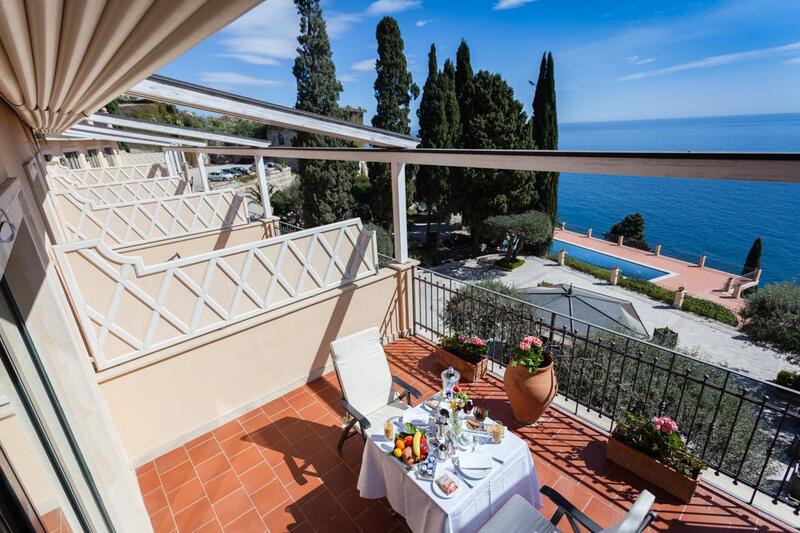 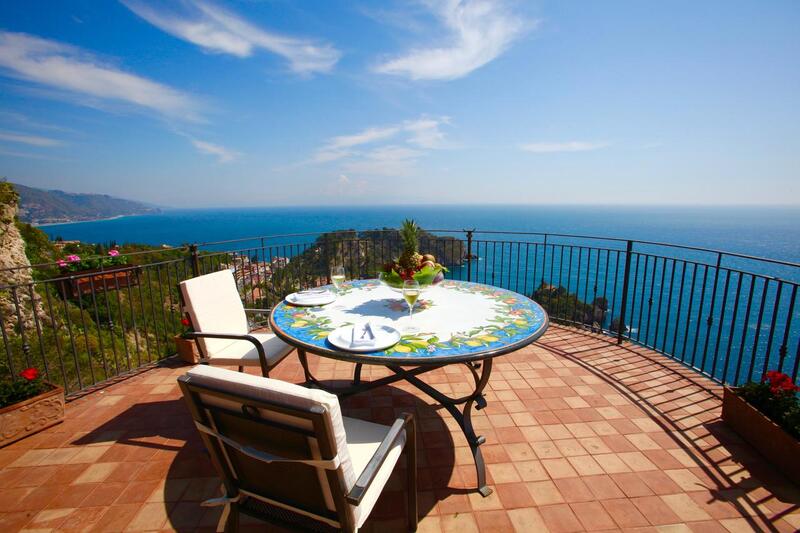 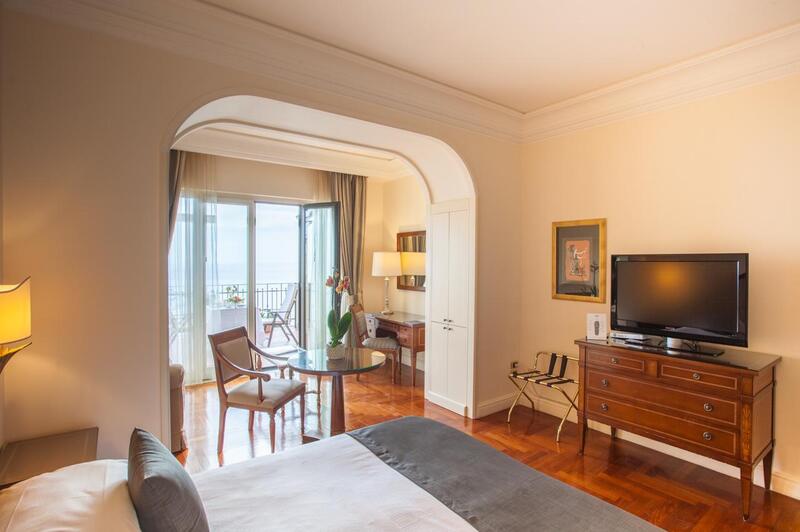 Grand Hotel San Pietro features an outdoor pool and sun terrace, overlooking the Ionian Sea. Taormina's historical centre is a 15-minute walk away.
Rooms at the San Pietro are spacious and have flat screen TVs with satellite channels. All have views of the garden or the sea.
Services at the hotel include free WiFi access and free parking. Staff at the 24-hour front desk can arrange tours and car hire. A well-equipped gym and massage service are also available.
A buffet breakfast is offered daily and includes croissants, cold cuts, eggs and hot drinks. The Grand Hotel San Pietro offers both a traditional Sicilian restaurant, and a poolside snack bar. Guests can relax with a cocktail out in the garden, which has views over Mount Etna.
A free shuttle service is provided to/from Taormina centre.

Sicily is Italy's southernmost region, and the largest island in the Mediterranean Sea. For more than 2500 years Sicily (Sicilia in Italian) has been a significant center of Mediterranean viniculture, although the reputation and style of its wines has changed significantly over that time.

The island was once most famous for sweet Muscats (see Pantelleria), and later fortified Marsala. Today many of its best-known wines are dry table wines produced under the regional IGT title Terre Siciliane, or the Sicilia DOC (see below).

Sicily
Rural viticulture and blue skies, Sicily
At its widest point Sicily measures 280 kilometers (175 miles) east to west, and about one third that distance north to south. Its roughly triangular shape led the island to be dubbed Trinacria (the triangle) during the Middle Ages, and is reflected in the triskelion (a motif with three protrusions) at the center of the regional flag.

Blessed with consistently bright sunshine and reliably moderate rainfall, Sicily's classic Mediterranean climate is ideally suited to the production of wine grapes. The warm, dry climate means that mildews and rots are kept to a minimum, particularly in well-ventilated areas that benefit from coastal breezes. This low disease pressure means that chemical sprays are hardly needed, so much Sicilian wine is produced from organic grapes.

Alongside grapes and wine, Sicily's key exports are cereals, olives and citrus fruits. Its economy has been based on these commodities for centuries.

Ironically, the island's near-perfect viticultural conditions played a key role in the downfall of Sicilian wine in the late 20th Century. Reliable sunshine and low disease pressure have always made it easy for Sicilian vinegrowers to push their vineyards into generating high yields. When the Italian government offered subsidies for "upgrading" to higher-yielding vine management techniques, the temptation was too much to refuse. Many thousands of acres of low-yielding bush vines were rapidly converted to high-yielding tendone (pergola) or guyot (cane-pruning) training methods.

These higher yields naturally led to imbalanced, flavor-lacking wines – a drop in quality that was soon mirrored by a drop in consumer confidence. The market was soon awash with low-quality, low-priced Sicilian wine. Happily, the movement to reverse this reputation is well underway, and Sicily is now one of Italy's most promising and interesting wine regions.

Sicily's soils, and the mountains from which they came, are of particular interest when it comes to studying the island's viticulture. Mount Etna, the towering stratovolcano, dominates the island's eastern skyline, and is responsible for the mineral-rich, dark soils that characterize the Etna DOC vineyards. Vines are now being planted higher up on the volcanic slopes, to capitalize on the cooler air and richer soils there. (source wine-searcher) 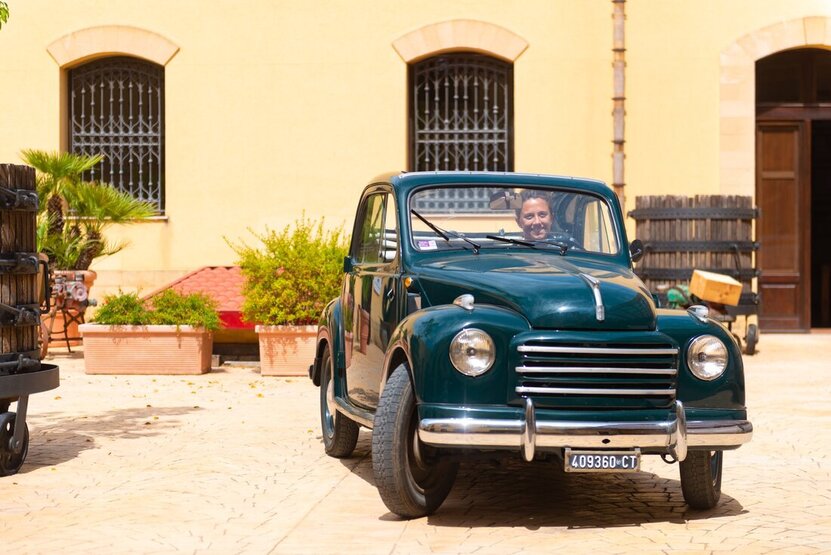 Located on Sicily’s western-most coast near the town of Marsala, Caruso & Minini boasts a history that harks back to the late 1800’s when Antonio Caruso bought the company to grow grapes for the nearby Marsala factories. The company was passed through subsequent generations until Nino Caruso finally decided to begin making and bottling his own wine in the mid 1900’s. In 2004, Stefano Caruso joined forces with Mario Minini of Lombardy to launch the present-day winery, producing wines from indigenous Sicilian varietals such as Catarratto, Nero d’Avola, Frappato, Inzolia, and Nerello Mascalese. Today, Stefano’s daughter Giovanna works closely with her father to head up this historic winery.
The area, which was under water millions of years ago, is characterized by its alluvial soil, rich in water and organic substances. Most notable are the large stones called cuti in local dialect. The softball-sized cuti not only impart a distinct minerality on the grapes grown in them, but also soak up heat from the sun which they transfer to the vines, allowing for an earlier ripening of the grapes thus making harvest possible at a stage which will allow for higher acidity in the wines.

Tenute Lombardo is the result of more than fifty years of hard work and the passion for the land. At present, Giuseppe, along with his sons Salvatore, Gianfranco, and Roberto own the winery. Over many years, the family has grown a variety of vines in their vineyards in the various wineries. In the year 2006, the brothers got the awareness, and along for vine cultivation, they started producing wines. Later in the year 2013, they renovated an old farmhouse where there was a history of rural life and wine production. 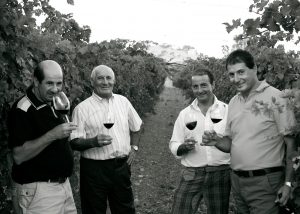 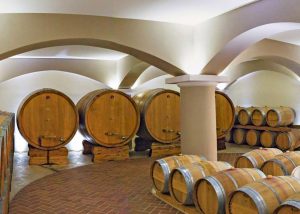 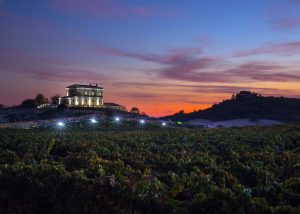 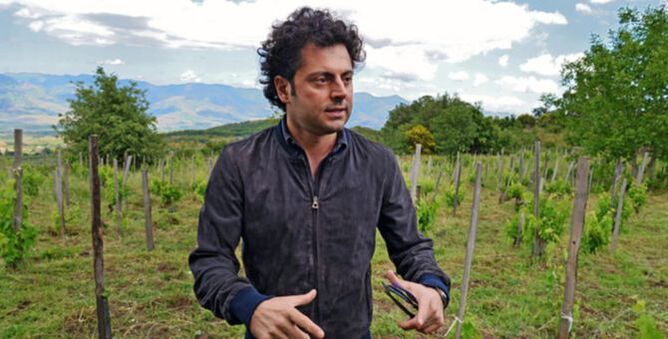 Graci, situated on the north slope of Mount Etna at Passopisciaro, is found in an area where viticulture dates back several thousand years. Their vineyards sit at an altitude between 600 and 1,000 meters above sea level. Many of the vines are still on original rootstock, ungrafted, having never been affected by the phylloxera scourge thanks to the unique nature of the volcanic soils.
At Graci, young Alberto Aiello Graci remains steadfast in his respect for local traditions as well as the distinct nature of each vintage and only cultivates traditional varieties indigenous to Mount Etna: the red grapes Nerello Mascalese and Nerello Cappuccio, and white grapes Carricante and Catarratto. 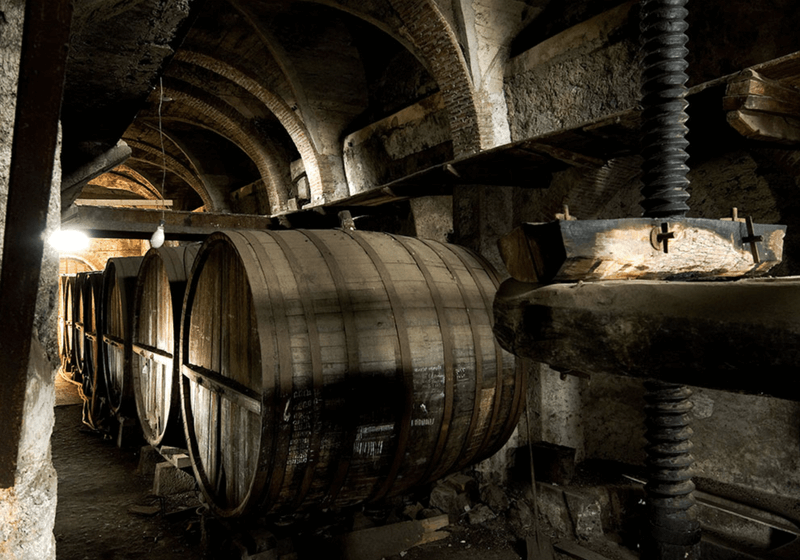 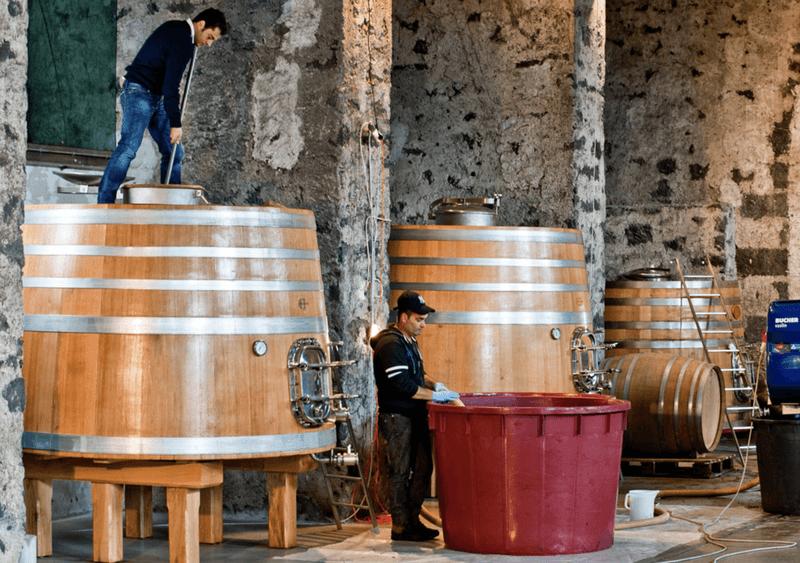 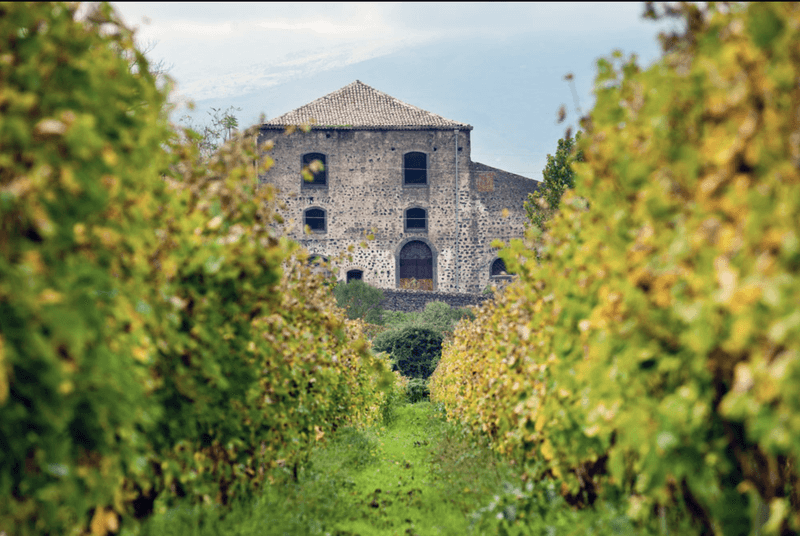 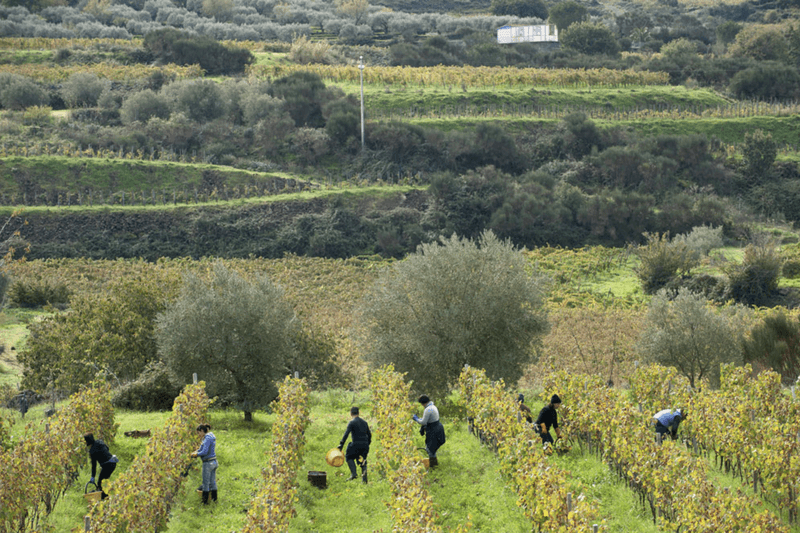 Firriato was established in the early 1980s thanks to the intuitions of Salvatore and Vinzia Di Gaetano, who saw in the age-old wine-making tradition of the province of Trapani a potential for the production of high quality wine. Since then, this tenacious and entrepreneurial couple has, with the help of top enologists Giuseppe Pellegrino and Giovanni Manzo, created a range of wines that suit the most refined palates.  With the revival of Sicilian wines, Firriato began implementing a project during the nineties designed to safeguard and restore the island’s varied land. The first estates in the countryside of Trapani were added to over time with the acquisition of Cavanera on Etna, and Calamoni on the island of Favignana. The two regions are a reflection of a Sicily that is, geographically speaking, poles apart. They practice 3 completely different viticultures, coastal, hilly and mountain. 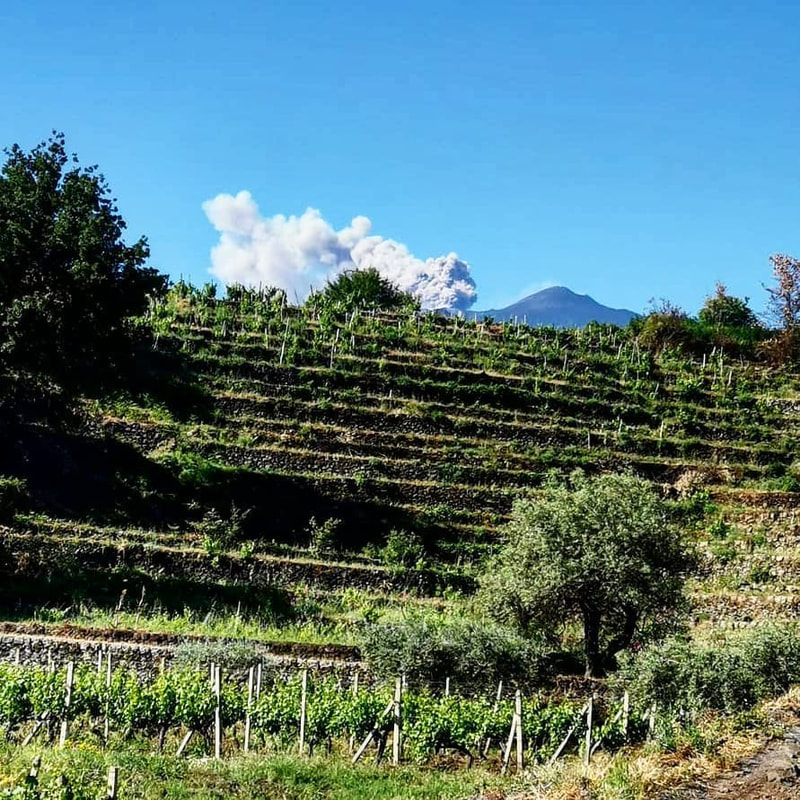 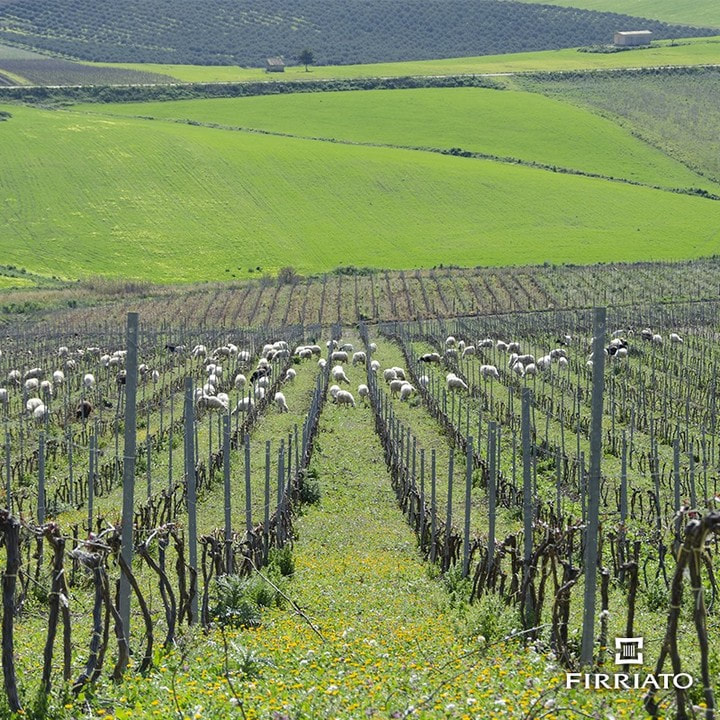 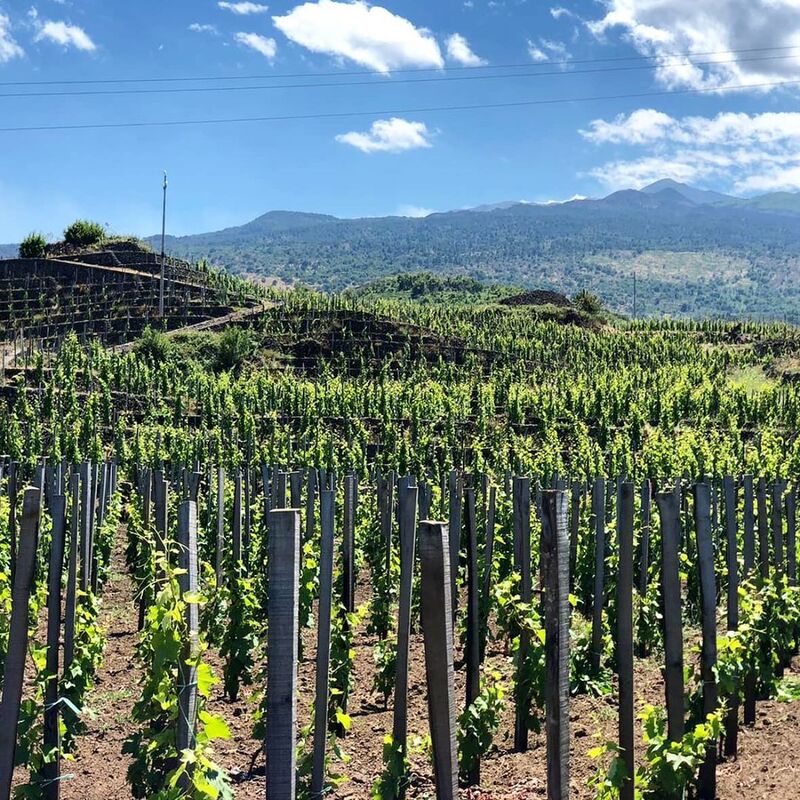 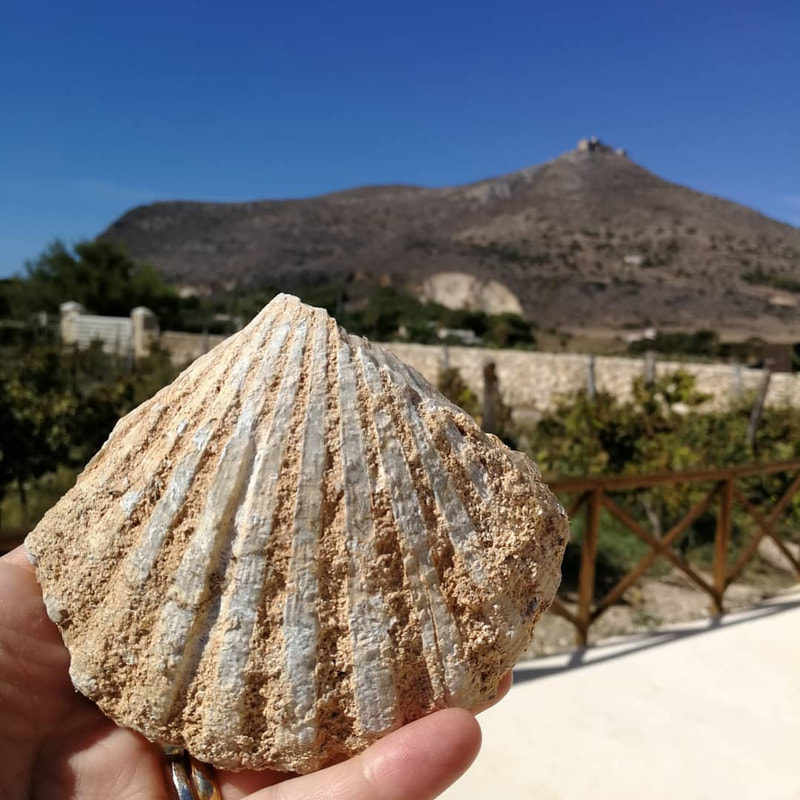 ​The Sallier de La Tour project was born in 2008, the year in which my first cousin Filiberto Sallier de La Tour, prince of Camporeale, country man and passionate romantic like few I have met in life, asks us Tasca to take care of his beautiful estate a few kilometers from Palermo.

Having defined some bureaucratic and formal details, we left with great enthusiasm, and with all the humility that a new agricultural and viticultural challenge imposes from the very beginning. At Sallier de La Tour we have bet on Syrah, a variety that we have studied in all its agronomic and productive aspects.

The basic idea, using a so-called “international” grape, seems to go against the tide with respect to the search for roots

native of our very rich island. However, we are increasingly convinced that some suitable vines, such as Syrah in this case, know how to best translate the "language" of a specific territory.
The Syrah of Doc Monreale is painstakingly building its own identity, but as we know in wine there are no shortcuts and only with the perseverance that distinguishes us will we arrive, harvest after harvest, at the ambitious goal that we have set ourselves.

The work of the Estate is told today through three different variations of Syrah; following a project to enhance the territory, today - together with Syrah - we also cultivate native varieties such as Grillo, Inzolia and Nero d'Avola. 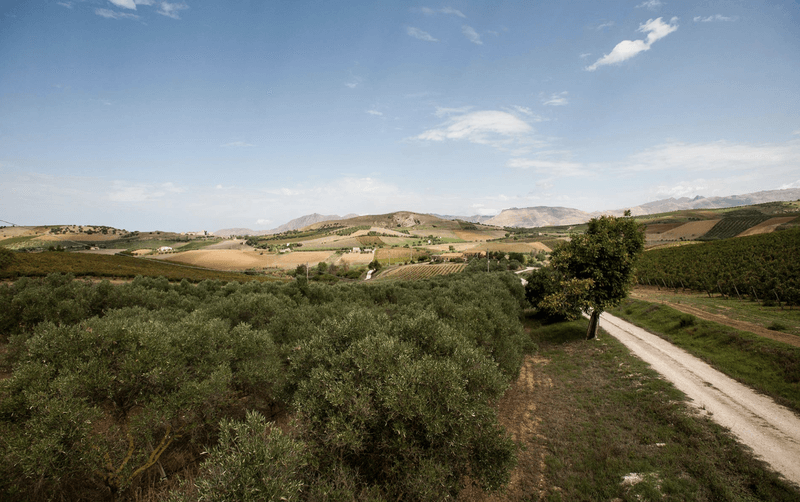 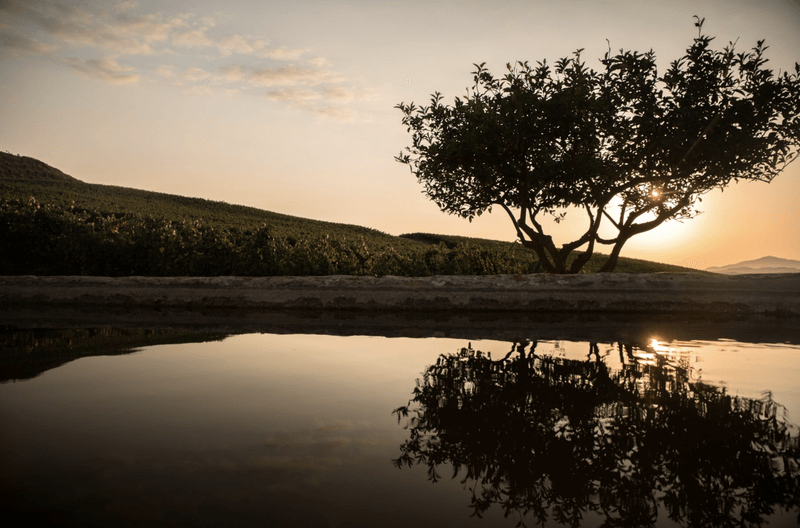 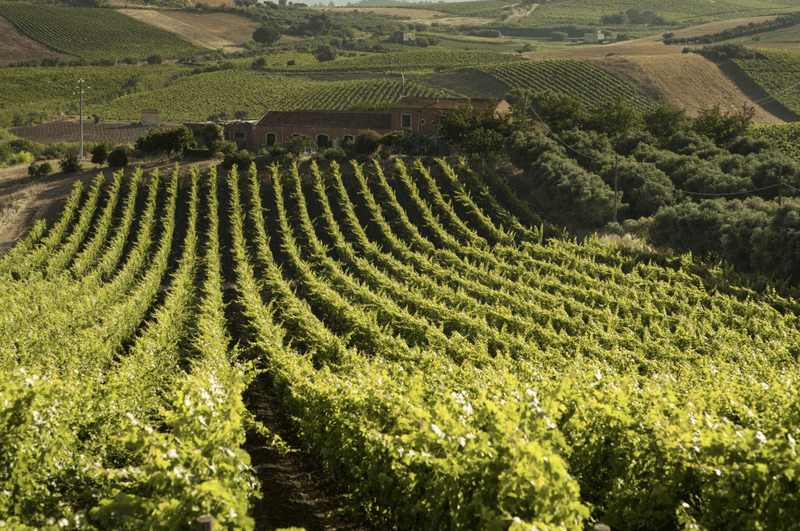 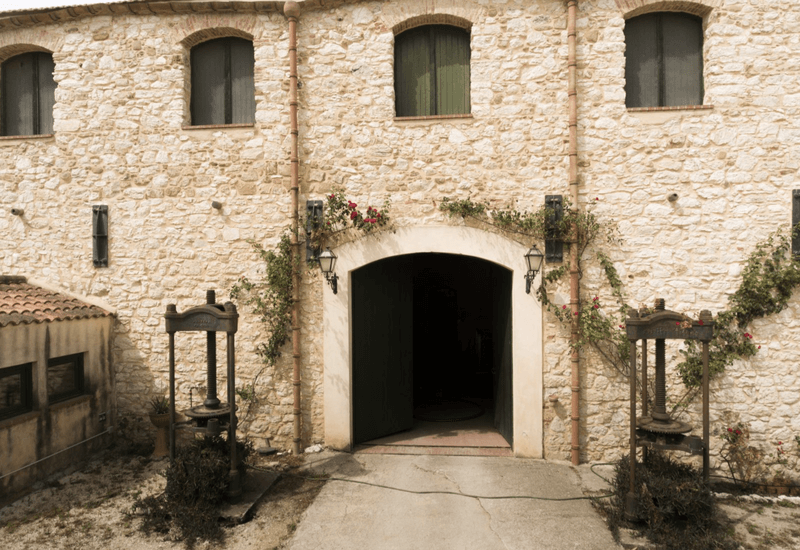 Our family has dedicated itself to the olive cultivation and the oil production for three generations. Our grandparents started their adventure in the lands near Serradifalco, realizing in that moment their vocation and the potential of the territory. At their arrival to the new farmlands, bought after the war of the 1945, they planted an olive tree as a symbol of their beginning. From this indelible link and the inherited respect, we started to write a new story that shares the same values and the same passion as our grandparents.

In 2001 four young cousins decided to start a new business and planned the completion of the entire process of production with the aim of promoting their olive oil in the international markets.

Located in the heart of Sicily only a few kilometers from the Mediterranean sea. Arkè is its history, the history of the family. It is values and charm. Arkè means working in an amazing territory. 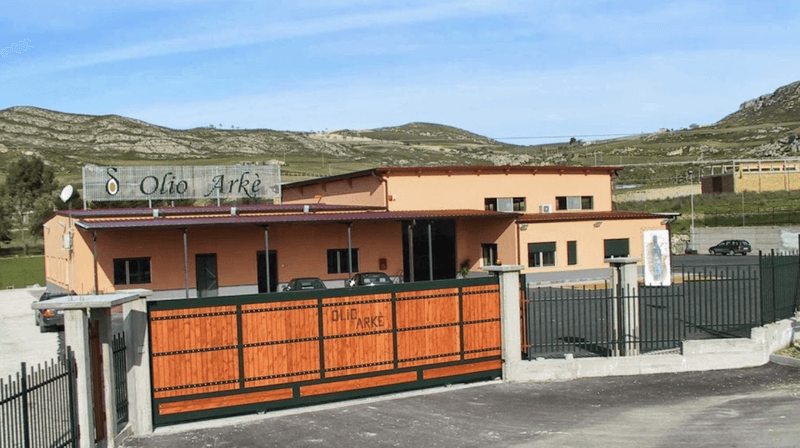 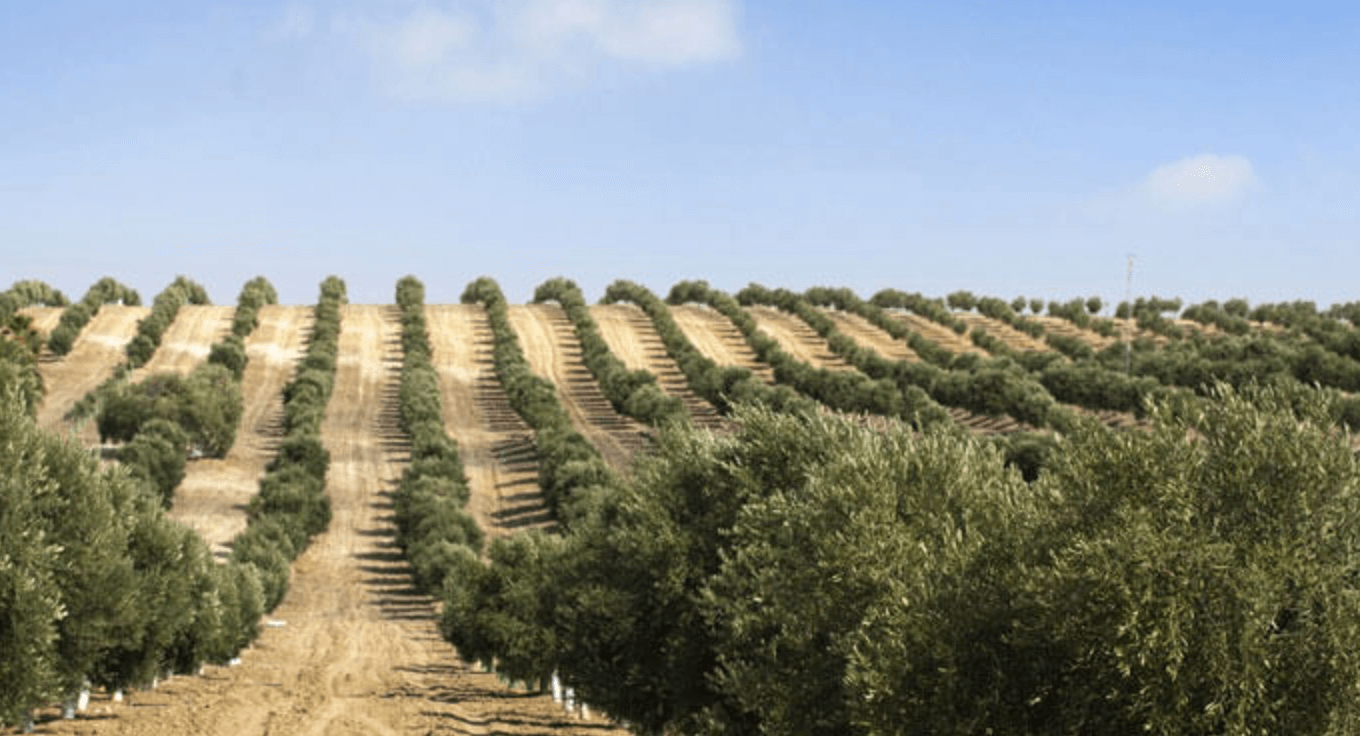